I decided, after print tests, that this little book would be best printed at Blurb, rather than on my Epson. I've never used BLURB before, so I am interested to see how things turn out.

The Little Deerfooted Girl  is a small story about a vain little girl.  I have never been able to decide if it is a children's book or an artists book. It is quite unlike any book I have done to date.

I was inspired to do the tiny, little, narrative watercolors while staying in my favorite cabin on the Northshore of Lake Superior last summer. I was recovering from injuries and surgery, able to do a tiny bit more each day that I was there. It was sort of my line in the sand, I guess.  Somehow, despite the limitations, I was going to WORK, dammit! 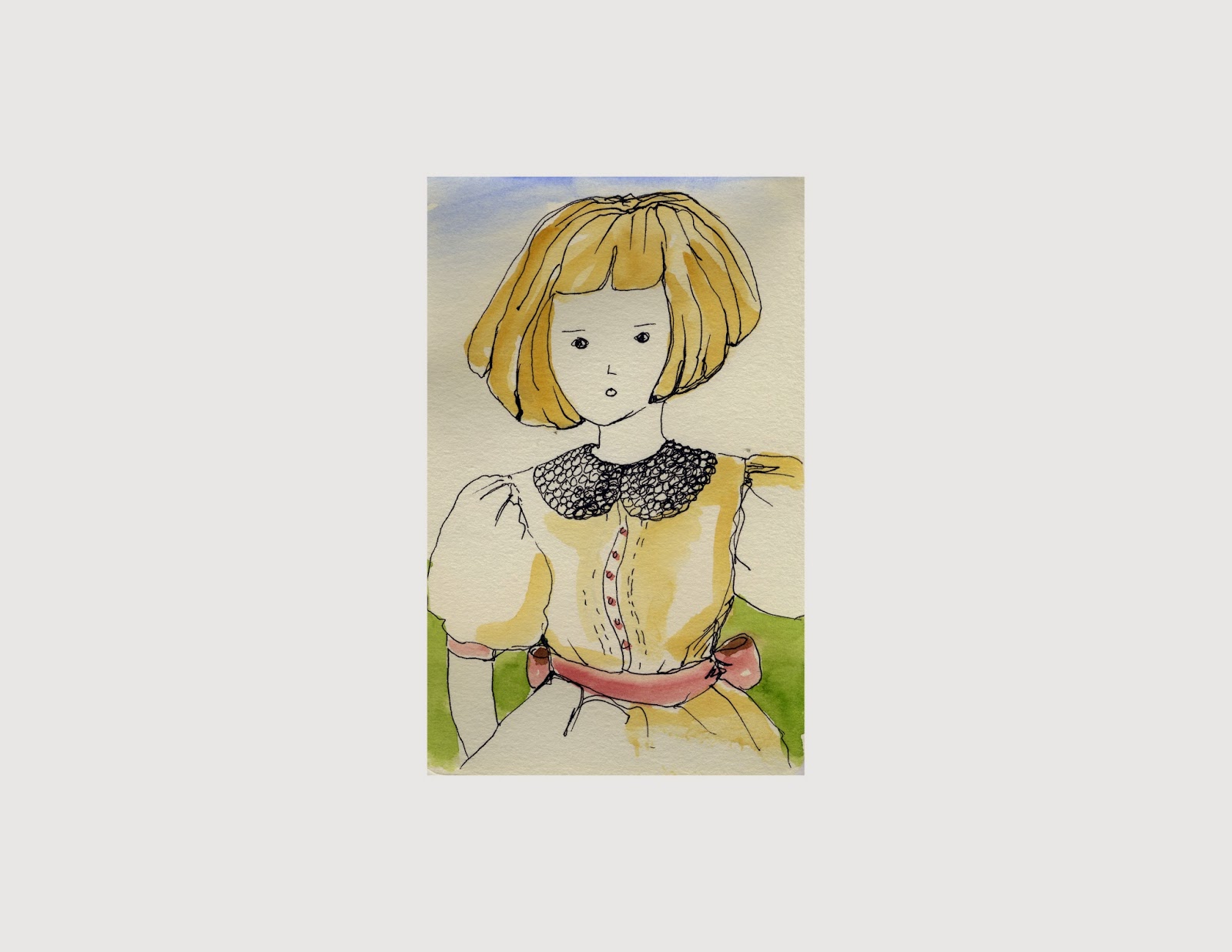 Posted by Susan Hensel at 4:53 PM No comments: 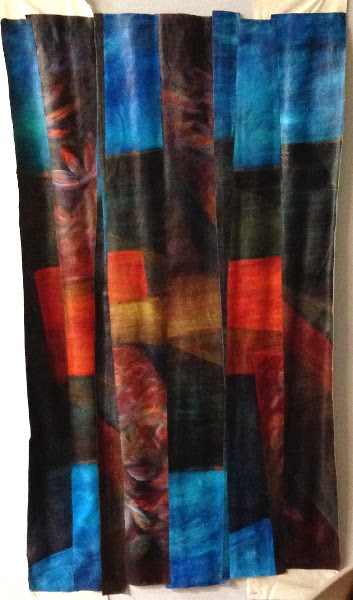 Posted by Susan Hensel at 9:47 PM No comments:

Posted by Susan Hensel at 3:24 PM No comments:

The Habitat Project has left the studio

The very last day before the Habitat Project goes to its "forever home."

Hope. Optimism. Generosity.
The clients of Habitat who worked on this project filled the room with their excitement about building houses and creating safe, secure homes for their families.  They were filled with pride in their work , great optimism and hope. They generously contributed their time and talents to this artwork, creating a “crazy quilt” of home.


Posted by Susan Hensel at 2:46 PM No comments: 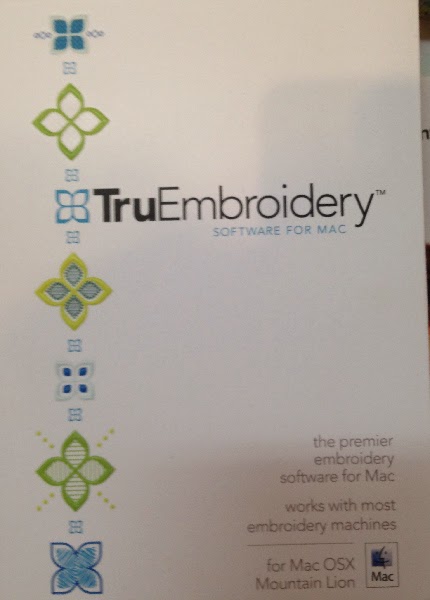 The key purchase for this Jerome Project Grant is the software, TruEmbroidery.  It is a set of digitizing programs that will allow me to develop original embroidery, from the ground up.  I started working with it a bit a week or so ago and then got the South Minneapolis cold that cleared Puffs with Lotion off the shelves at the grocery store.  It was frustrating.  The software could not understand what I was telling it to do...clearly we were speaking a different language.  Learning this software reminds me of learning Adobe Creative Suite.
So, I went back to square one and simply imported a photo of my niece Heather and let the software do its thing.  My input was to tell the software how many colors . 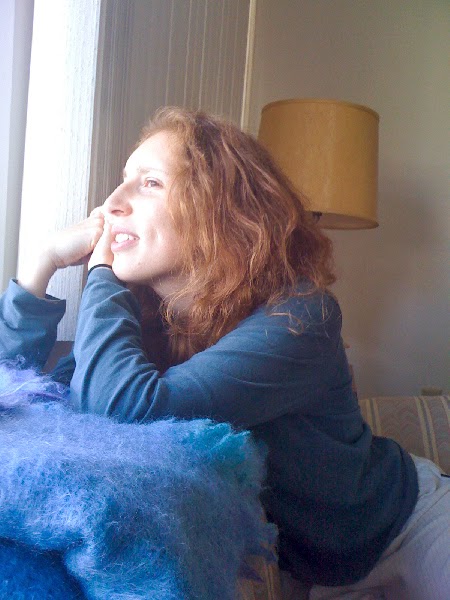 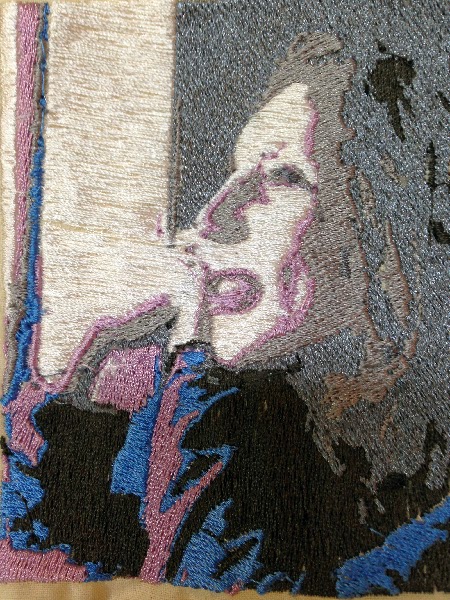 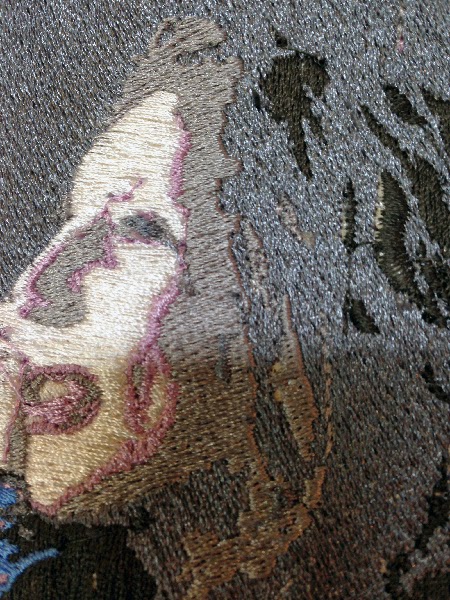 Posted by Susan Hensel at 7:57 PM No comments:

Big News! or What's with the Barbie Dolls? 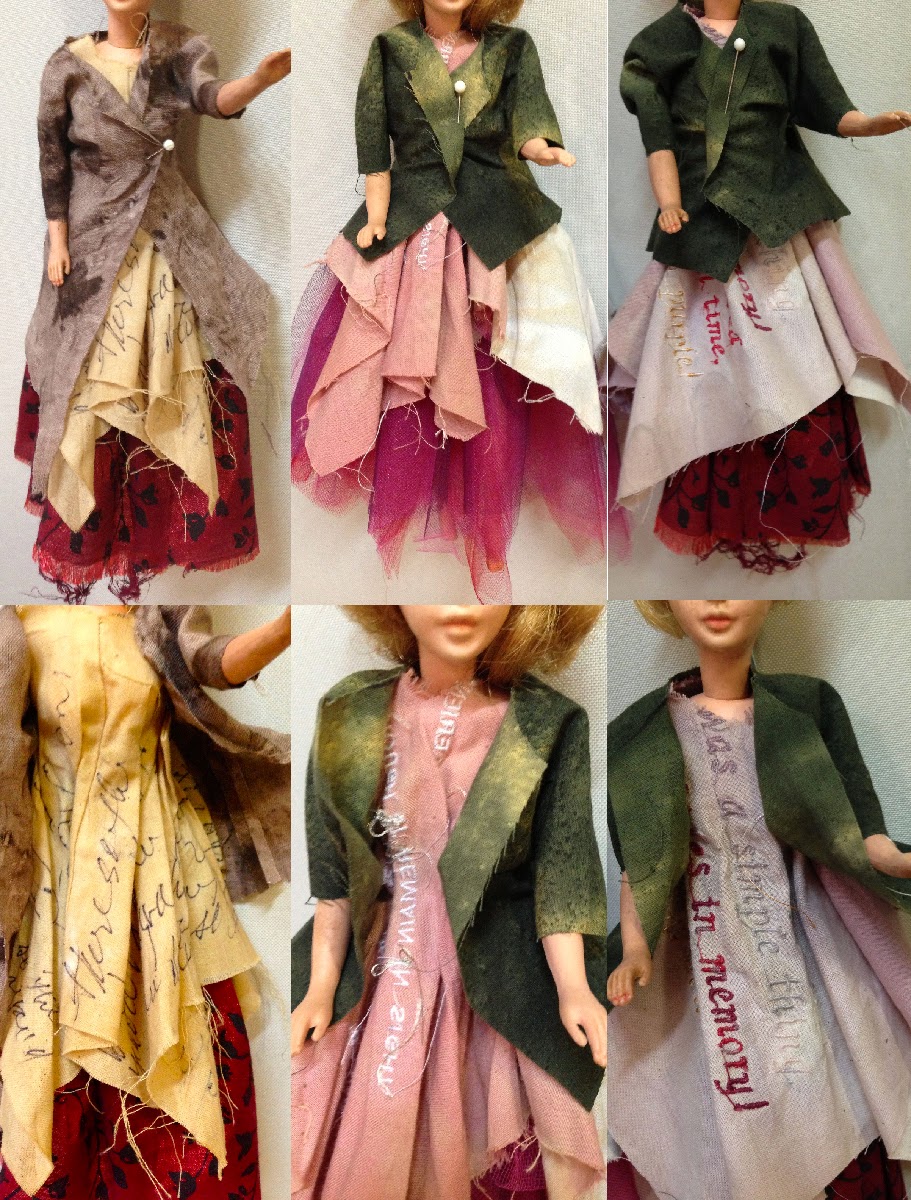 I applied one last time for the Jerome Fiber Artist Project Grant for emerging artists...and I got it!
The "Barbies"  are samples of how the project might look

Women have been telling their stories through needlework for generation upon generation.  Within the traditional forms of dress and decorative stitching there is often a secret, hidden language of the oppressed. In this project, I will make the public, private and secret stories of contemporary women manifest in computer assisted machine embroidered clothing.

We often think of embroidery as the delicate work of girls and women of the leisure class.  We think of samplers, delicately stitched hankies, linens for bed and table. We might also think of traditional designs on traditional ethnic costumes, identifying tribe and region. Embroidery seems to us a beautiful frippery.

But embroidery has deep narrative and subversive roots. Histories, mythologies and secrets have been told in stitch. The Bayeux Tapestries documented the Battle of Hastings, 1066, from the political point of view of the victors, in over 200 feet of embroidery. Mary, Queen of Scots, and her court, prevented from displaying their education, developed a coded language of stitch to communicate. Hmong story cloth tells both traditional stories in stitch as well as the harrowing stories of escape and emigration to America. Sujani quilts from India traditionally convey a mother’s dream for the long life of her newborn, but also tell the stories of women: birth, death, abuse, and infanticide.  These are all political, the testimony of a largely silent, culturally oppressed group throughout history.

I use the techniques of embroidery, both hand and machine aided, as drawing and painting tools, laden with history and expectations that can be exploited for startling new expressions.

I have been engaged with free-motion machine embroidery as drawing for several years and now want to expand that engagement through original design in computer aided machine embroidery.  I will develop complex alphabets and images that will facilitate recognition of the political underpinnings of embroidery, clothing and fashion.

As an artist, my overarching goal is to elevate “women’s” traditional crafts, and specifically the craft of embroidery, to fine art practice. I will use updated techniques of the historically oppressed to comment on the continuing oppression of women in my world, the first world, a shifting landscape, certainly, but still worthy of investigation.  The goal of my project is to tell women’s stories in clothing that can be described as artwear, walking sculpture, or performance art. To do this, I will learn to digitize original embroidery designs and use my computer assisted embroidery machine to create narrative content in textiles that I will then use to create original clothing.

The project that I plan to create is titled WEARING MY AGE.  It is a series of up to four costumes from hand dyed, variably distressed muslin, that will function as narrative uniforms demonstrating the public, private and secret language of women at distinct stages of life through the use of original text and image.  Each uniform will be comprised of a jacket (public language), a dress (private language) and a petticoat (secret language).  Each part of the uniforms will have text embroidered on the fabric, expressing the experience of women at various ages.

The text for the clothing will be written based on interviews with a national group of female artists and creatives, collected using email and social media, about the stages and ages of being a woman. The answers will be edited and digitized into machine embroidery.  The digital software, Tru Embroidery, for MAC, will allow me to develop images and typefaces that I will be able to import into the Baby Lock embroidery machine.

Posted by Susan Hensel at 7:47 PM No comments:

While I bought Puffs with lotion and Vicks Vaporub today... a tiny bit is getting done between nose blowing and naps. I updated the Susan Hensel Projects website, correcting a typo and putting in the right  photos for the Patterns of India series under the other artworks tab.

I also glued up these things today.  I love cutting up old stuff and re-assembling to make new things.

I don't know what I think about these three things.  I know I like the first one...the others?  Don't know.

Posted by Susan Hensel at 6:15 PM No comments:

It's been a few days of odds and ends.

But the good news is the Habitat project will start up again next week.  The measurements are true and when everyone is either healthy or back from vacations, the remainder of the wiring and crimping will resume.

I got a show scheduled for 2015. And I got my health insurance squared away today, scheduled my taxes and the routine maintenance on my car.  So, with a real sense of accomplishing nothing and conversely accomplishing a lot, I leave the studio to drink well deserved wine.
Posted by Susan Hensel at 8:52 PM No comments: