Have you been to Marfa, Texas? I have.

Marfa , Texas is the hot, dry, dusty home to the "shrine of Donald Judd."  The town, a former ranching town, former military town, former water stop on the railroad, has transformed itself into all things Judd.

I have always truly loved his work.  Being in an appropriate space with his sculpture is a transcendent experience.  The sculptures are not just the manmade materials he used, but their effect on space.  They are slow to tell their story, but if you are open, and allow yourself the time, they will reveal themselves.

All that being said, traveling to Marfa was, in many ways, a perplexing experience.

It is hard to get to.  Three hours from the nearest airport:  for me that was Midland.  I drove through oil fields, sand quarries and beautiful mountains seeing a roadrunner, one mule deer, half a dozen pronghorns and many, many agaves and prickly pears of all sorts.

I am finding Marfa confusing.  So many street signs are missing and building signage is way different: subtle or absent.  So, I saw 1 cool show at the Ballroom Marfa visited the Judd Foundation office , Marfa Books and bought groceries this morning.

After lunch, I wandered around downtown.  I went to the shops and gallery at the Paisano historic hotel.  I went to Marfa Works on Paper- very nice paper and ceramics: not superb, but more affordable than other places. The Ayn Foundation was open with 3 of Andy Warhol’s Last Supper paintings where I had a lovely conversation with the attendant who is a friend of critic Barbara Rose (yes, that Barbara Rose).  We talked a lot about archives and film digitization.  I had a lovely conversation at both Marfa Books and the Judd Foundation. I went to Exhibitions 2D which you should all look up on instagram.  He is a dealer for 11 artists.  Great guy, great art! 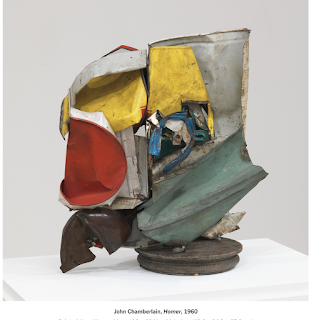 I saw the John Chamberlain stuff in an unmarked Chinati building that was open today for the community days.  Wow!  With no signage, I easily could have missed it.  I have a new found respect for Chamberlain. Yes, it is big-boy-stuff.  But there is way more to it than I had realized.  They had LOTS AND LOTS of pieces...LOTS! I don’t know that I had ever seen his wall works before: they were stunning, with a lot of intentional use of paint.  They also had some works on paper that were called Drawings as Lithos.  I also learned that Chamberlin worked in foam rubber for a while.  Then I tried to go to a number of other important galleries who chose to be closed this weekend. GRRR.  I wound up at Pure Joy Marfa, a charming little gallery in a garage sized building on an industrial lot.  She had a show of Walter Robinson and artists books/facsimiles of the Private Notebooks of Lee Lozano.  Had to get them!

It is pretty damn hot and the town shuts down early!  I am back at the house for the evening, I think.  I may look into the Marfa Film Festival, though.

I am so tired!  The Chinati tour was overwhelming and really made me think hard about the purpose of legacy museums...in the middle of no where!  My body held up OK, but I was glad to have the walking stick by the end.

I loved most of the work, but, with the exception of Roni Horn and a temporary Bridget Riley, it really is a boys club:  sort of  “Me and my buds,” although Judd and Flavin had a flaming fallout.  You can see most of the work really well at Chinati.org.

The questions that kept coming up were:
Why here?
Why so inaccessible?
If it is so important to show these things as Donald wanted them shown, then why such limited access?  Few of the buildings are open to the general public without a paid guide.
If the work is “important” then why are the climate conditions not considered? The aluminum cubes, which are wonderful, are actually expanding and contracting a lot in the temperature swings ( I saw bowing and gaps). How do you keep stretched canvases and surface mounted works on paper clean with all the blowing dust and intact with no solar protection and no temperature and humidity consideration?
If seeing the work is important, then why is there not auxiliary lighting for bad days?  Robert Irwin’s piece was a dud because of clouds.

While the machismo and the questions are persistent,  most of the work was, indeed, astounding. 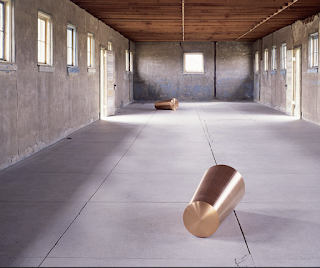 The solid copper Roni Horn piece could make you weep.
The Bridget Riley was so optically active and beautiful in person.  The photos do not do it justice.
The blues in John Wesley’s paintings were to die for, but the subject matter leaned toward Tom Wesselman.
The Dan Flavin, while beautiful, became tiresome in its demand for 6 buildings.  It struck me like “man-spreading” on the subway.  But interesting conundrums for conservation and the Flavin estate to find companies who will manufacture the necessary replacement bulbs!
Judd’s 100 Aluminum Cubes were gorgeous!  But why so far from civilization?  The windows on both sides lit them and provided contrasting vistas: the concrete cubes in the field on one side and the quotidian residences and empty buildings on the other side.
The 2 Carl Andre’s were pretty wonderful.  I did not like the Kabakov and the Ingolfur Arnasson’s installation was so subtle that it almost wasn’t there.  The space for it was the right size, but the lack of additional light, I think, hurt it’s ability to reach you.

I came back to the adobe and immediately took a long nap! and missed the last film of the film festival.

Tomorrow I tour some more personal spaces.  But, in reality, I am ready to come home and see my puppy;-)

I went on the “Block Tour” today.  It is the tour of the first properties that Judd bought and lived in.  It is comprised of 2 armory buildings that were moved into town, before Judd, the quartermasters home, a tar papered shed( the foundation re-tar-papers it from time to time), a water containment feature, a pergola and a double wall of adobe bricks.  15 people were allowed to tour with a tour guide.  There are artworks here that will be seen no where else.  They were installed after they were returned from exhibition in varying states of disrepair.  Judd installed them through the “garage” doors, and then bricked up the doors.  They are going NO WHERE!  They fit the space beautifully, truly! We had a sunny morning, so the light, for the most part, was fine.  But, once again, no augmenting electric lights, no climate control except for a little bit of window film. The temperatures range from 0 degrees to 120 degrees in the summer.  He had a bed in every room so he could view the pieces from all angles....and sleep if need be.

We actually saw 2 exhibition spaces and 2 library spaces.  We saw early plywood works.  He was considered a colorist at one time.  He used a lot of cadmium red light oil paint on the plywood pieces.  Yummy!  We got to see the piece that was the revelation that led to free standing sculpture and  the development of the pieces that included plexiglas.  Way cool.  ALso saw galvanized pieces that I had not seen before.  The galvanized pieces were, perhaps, among the first “boxes” fabricated by others.  There was a 20’ wall (at least!)  filled with galvanized boxes that were @ 20” x 20” x 4-6’ deep, 3 or 4 rows high. Really cool...but not quite stunning.  They reminded me of gymnasium cubbies to some extent.  But further on in the tour we saw the development of the stacks and the aluminum cubes.  they were STUNNING.  The stacks are usually 10 high....Hmmm, Judd loved even numbers.  They really worked in the spaces.

The library comprised 2 long rooms.  One library was 20th century art history, subjects arranged chronologically. The second library was sort of travel related arranged by location and subject.  Supposedly he read 4-5 hours per day from among his 13000 volumes.

All of it is “exactly” as it was the day he died.  Memento mori.   Kind of weird.  The books are disintegrating, un-used, unread.

I tried to take the studio tour in the afternoon where I would have seen some of his early paintings, but they were over sold.  Boo.  And, once again, mighty precious!  Only 9 people were allowed on the studio tours at one time.  Not very hospitable, although they were lovely about it.

So I went to the Chihuahuan Desert Research Center and fried a bit among the cactus and met an elderly man who was in one scene of NO COUNTYRY FOR OLD MEN.  They needed a mine expert to help them with one scene....and he was it.  While it WAS way too hot for me to spend much time, the drive under the big skies and through old mountains was lovely!  And the Center is way cool.  If you ever come out here, go in the early morning.

DAY 4 was trying to get home.  All flights in and out of Houston were cancelled.  Got a flight through Dallas and fell into my own bed at 2AM yesterday.