A new quest has begun... 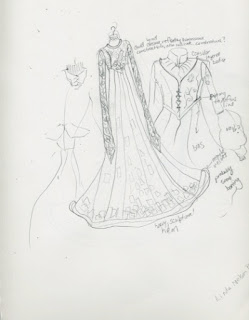 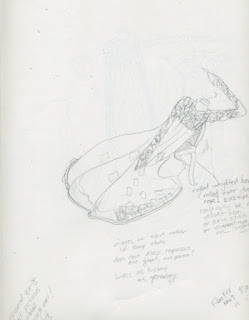 The studio is as chaotic as it usually is these days.  I am framing, wrapping, storing, moving among contractors as the re-modeling comes near to a close. Transition is still the the word of the day.

Amid it all, I applied for a grant, but did not win it.  So be it.  I carry on.  My goal remains.  It is to make another oversized dress (ultimately more than one) from unbleached muslin, with a small bodice, overly long noodle-sleeves.  The bodice and sleeves will be heavily embroidered with lace images. The skirt(s) of the dress(es) will tell the story.

It all began with old, worn white dresses.

The dresses hover like ghosts, ethereal, whispering in the registers just beyond hearing; flitting about in that peripheral place just beyond the corner of your eye.

I am interested in the narratives revealed by clothing: the power of clothing to tell a story, to support a myth or to define a role. My goal is to tell new stories making manifest internalized meanings implicit in fashion and to reassess traditional understandings of gender roles.

I have collected nightgowns, baptismal dresses, children’s clothing from the late nineteenth and early twentieth century and I have sewn giant muslin dresses. They function as carriers of stories, individually and in groups. They are stiffened, suspended and animated to music, glued, painted and pinned onto canvas, and some are filled with light and sound They seem naïve, misguided, innocent, nostalgic, tragic, living in a dream world.

Each represents a costume donned by an individual enmeshed in a culture that attempted to define them or confine them to stable definitions of gender and class. Women’s history is tied up with fashion, their stories often hidden. Here, they are made visible.

Posted by Susan Hensel at 8:04 PM No comments:

Read more »
Posted by Susan Hensel at 4:46 PM No comments: 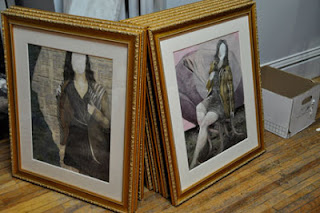 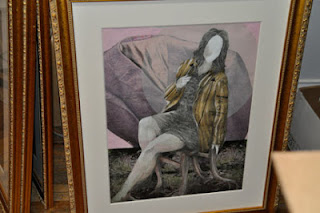 The frames were a long time coming...back ordered.  But the 8 ply museum matts were cut and shipped in a flash.  All ten are matted, glazed and framed. They are awaiting their wire hardware and picture lights now.  Whew!

They look so different framed.  The colors are richer; the focus seems sharper.  Go figure. Soon they will be safely stored, awaiting their time in  the sun.  The installation and performance is probably going to be summer or fall 2013. 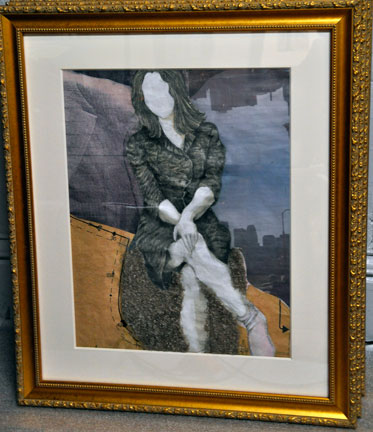 Posted by Susan Hensel at 8:31 PM No comments: